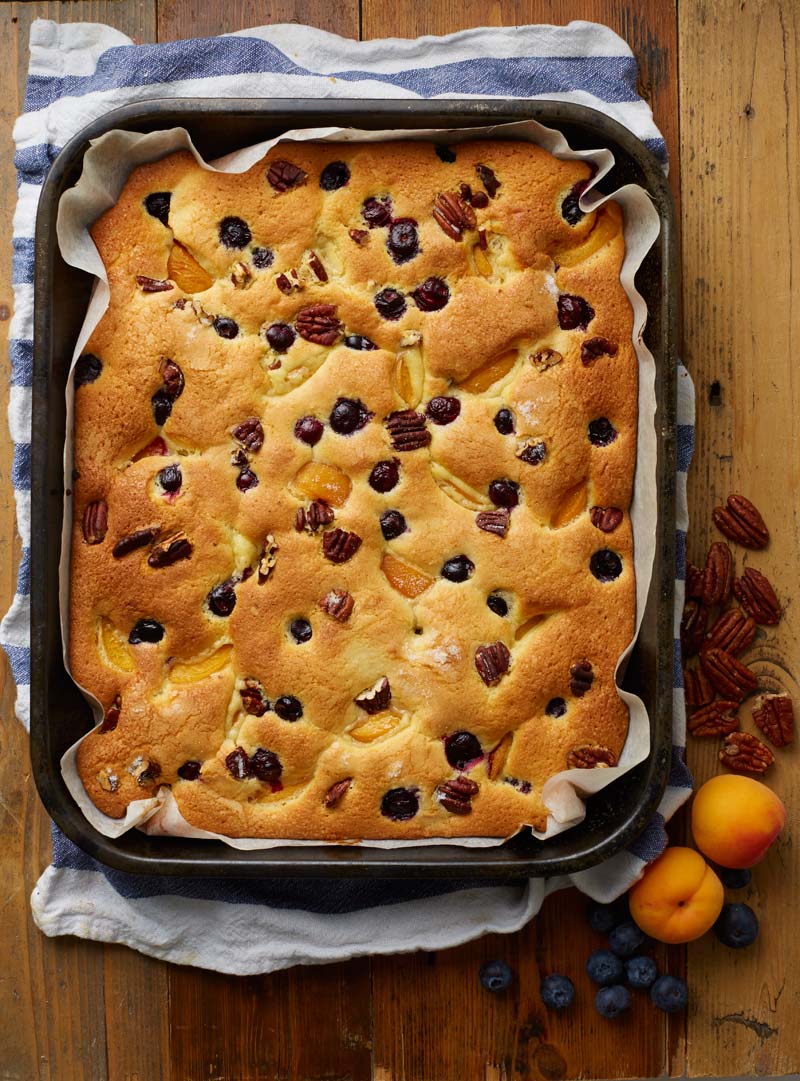 Preheat the oven to 180c/350f/gas 4
Line the baking tray with non-stick baking parchment
Chop the butter into small chunks and put into a bowl
Add the caster sugar and the vanilla essence and with an electric mixer - beat till light and creamy
Add the eggs one at a time and beat well
Sift the flour and baking powder and beat into the mixture along with the milk
Pour the mixture into the prepared tin
Chop the apricot into chunks, discard the stones
Break the pecans in half
Sprinkle the apricot, blueberries and pecan nuts over the top of the sponge mix
Bake in the oven for about 35/40 mins - till golden brown
Great served hot with custard or ice cream
Or cold, cut into squares with a cup of coffee

D is for Desserts

- Desserts spells stressed backwards!
- Pavlova , the meringue dessert was named after the Russian ballet dancer Anna Pavlova
- Marzipan was felt to have medicinal qualities and in the 16th century was dispensed only by pharmacists
- Tiramisu is a fairly new dessert, made originally in Treviso in Italy since about 1970
- In Asia, centuries ago sugar was prescribed to promote strength and sperm count
- It is said that we have a spare stomach for Dessert? ! ...
- ... but there certainly is a Dessert brain... it’s a biological phenomenon known as sensory specific satiety!
- Cherry Jubilee was created by August Escoffier in honour of Queen Victoria’s Diamond Jubilee, flambéed cherries with kirsch on vanilla ice cream
- Cookies are made of butter and love - Norwegian Proverb
- Vienna is responsible for bringing us the Danish pastry
- The oldest known cake in the world is the Linzor Torte from the Austrian town on the German border
- The word Dessert comes from the French word desservir
- A balanced diet is a cookie in each hand
- In France, the Provencal gros souper served at Christmas Eve, they have what is called "les treize desserts", which is a ritual presentation of 13 Desserts
- Mrs Beeton in 1861 sais "as late as the rigns of our two last Georges, fabulous sums were often expended upon fanciful Desserts"
- The history of the Trifle goes back to 1500s and has its roots in British history
- Commercial cake mix was invented in1949
- Crème Brulee is actually an English dish , Trinity College in Cambridge has been making them since the 1600s, and have an iron bearing the College crest used to burn the sugar
- Fortune cookies were invented in America by Charles Jung in 1918
- Cheesecake was believed to originated from ancient Greece
- Every Cook gets their just Desserts!
- The origins or ice cream date back to at least the 4th century BC
- The word Pudding to describe a Dessert is an English term is of Celtic origin