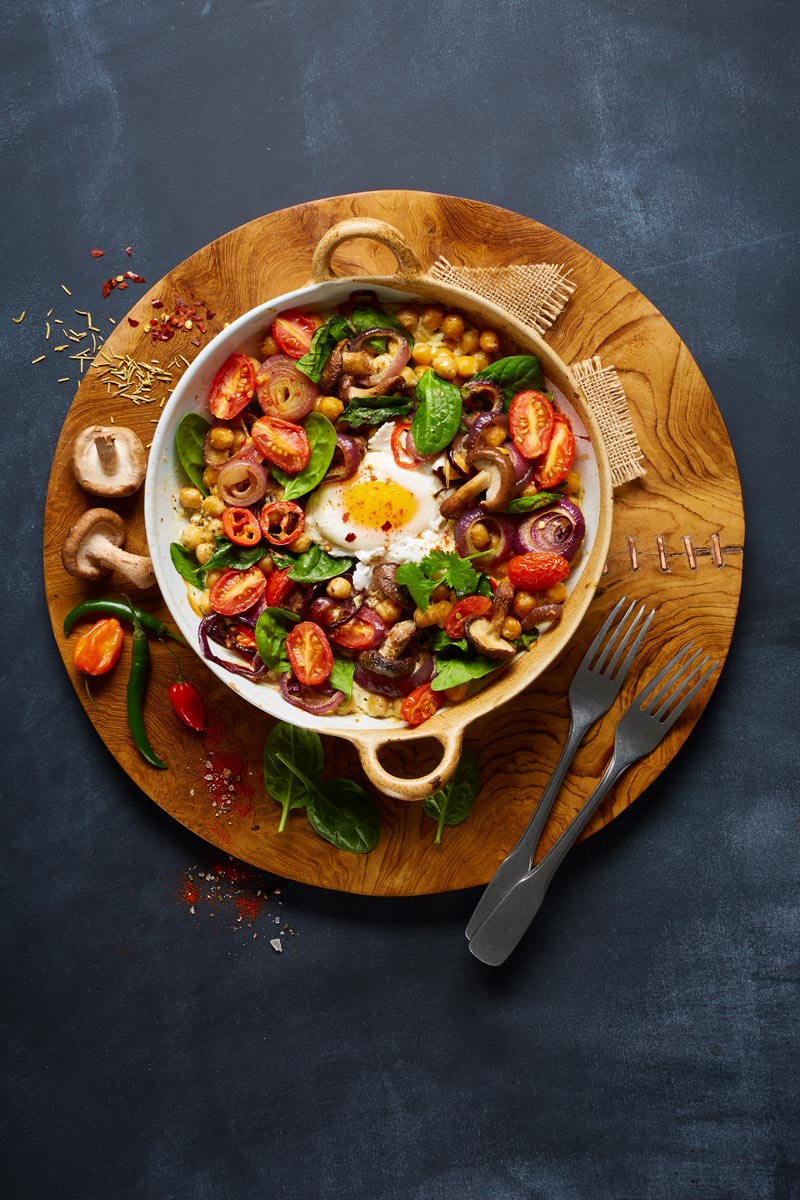 Peel the onions and slice
Wipe the mushrooms - and halve or quarter if large
Drain the chickpeas
Thinly slice the chilli
Halve the tomatoes
Pre heat the oven to 200c/400f/gas 6
Saute the onions in some oil in a large frying pan – when softened add the mushrooms and saute another couple of mins
In a large bowl add the chickpeas, tomatoes, paprika, rosemary, spinach, chilli, chilli flakes, crème fraiche and the onion mushroom mix, season with some salt and pepper
Stir through gently
Divide this mixture between 4 ovenproof dishes
Make a whole in the centre of the mixture in each dish and crack an egg into the space
Bake in the oven for about 18 mins – till the egg is set then serve

B is for Breakfast

"Only dull people are brilliant at Breakfast"- Oscar Wild

- The word derives from the idea of Breaking the fast of sleep
- Sliced bread first appeared in Britain in 1930
- More than 25% of milk consumed in the UK is taken in tea
- Marmalade was first made by the Romans using quinces
- Up to the 16th century breakfast in the UK consisted of bread , salted fish and ale
- Oats , which are rich in soluble fibre and help control cholesterol
- Breakfast was first mentioned in literature in 1542 by Andrew Boirde in “A Compendyous Regyment of a Dyetary of Health”
- The English claimed that the Scots morning bowl of Porridge helped them win the battle of Bannockburn
- More than half the worlds production of Grapefruit ends up as juice
- Queen Victoria introduced kippers to the English Breakfast table in 1842
- The largest cereal crops in the world in order of volume are wheat, rice, maize, barley, and sorghum
- The croissant originates from the Turkish empire where the army cooks made a crescent pastry the same as on their flag
- A Denver lawyer invented shredded wheat in 1893 to aid his digestion
- Hot cross buns , that are eaten at Breakfast on Good Friday have the cross on them to ward off evil spirits
- Kellogs Corn Flakes were the only cereal to be eaten aboard Apollo 11 on the lunar landing
- Every day 5 million people will eat sausages
- More than a third of all eggs produced are eaten at Breakfast
- One rule that naturists must abide by is that they must be dressed for Breakfast
- People who skip Breakfast are more likely to put on weight than those who partake.
- Otto Frederick Rohwedder invented the first machine to both slice and pack bread in 1928
- The workers in ancient Egypt were paid in loaves of bread
- Over 9 billion cooked Breakfasts are consumed in the UK ever year
- In an average lifetime a Briton will drink 11,000 pints of milk
- Over 560 million bacon butties are eaten each year
- The three meals that Somerset Maugham suggested you should eat in Britain were Breakfast, Breakfast and Breakfast